Home क्रिकेट The First Centurion of IPL 2018: CHRIS GAYLE
In the 16th match of Vivo IPL 2018,played between Kings XI Punjab and Sunrisers Hyderabad at Mohali on 19th April,Thursday, Gayle smashed the first century of IPL 2018. The outstanding knock of 104 off 63 balls from Gayle helped Kings XI Punjab to secure their third win in Vivo IPL 2018 Chris Gayle in his inning of 104* runs,he hit eleven sixes and  a boundary and to complete his first century in IPL-11 and also the first century of IPL season 11. 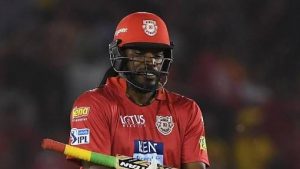 With the 11th six of his inning,when he hit Bhubaneswar Kumar over long off for a six,Gayle moved to 99. In the next over of Siddharth Kaul,Gayle took a single and completed his 6th century of his IPL career. 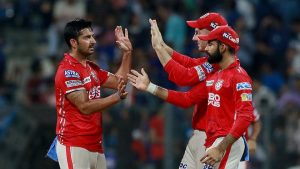 He also hit four consecutive sixes in Rashid Khan’s over. This year Gayle was not retained by RCB and was unsold twice in the auction. 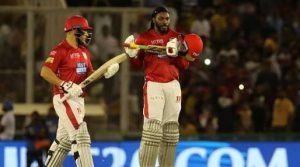 Later he was picked up by Kings XI Punjab franchise for a mere  base price of 2 crores.But,he proved why he is the best player of T20 cricket.In his first match of IPL 2018 against Chennai Super Kings, he played an outstanding Inning of 66 off 33 balls,second fastest half century from him off 22 balls and again in the match against Kings XI Punjab his century proved his capabilities. The Jamaican player became emotional after his century and said that many thought that he was too old but after this fifty,he did not need to prove anyone anything. He dedicated his century to his daughter. 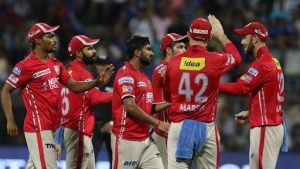 Man of the Match -Chris Gayle for his brilliant knock off 104* off 63 balls.