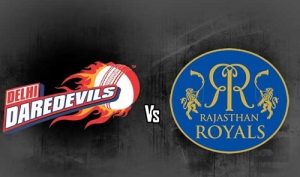 Rajasthan Royal registered their first win of IPL 11,beating Delhi Daredevils by 10 runs in a rain affected match in Jaipur,Rajasthan.
Chasing a target of 71 runs to win in 6 over Delhi Daredevils could only scored 60 runs. Delhi Daredevils won the toss and choose to field first. Rajasthan Royals had been 153- 5 after 17.5 overs when the rain interrupted the match Jos buttler (29) did well for the Royals striking two consecutive boundaries and a couple of sixes. Ben Stokes hit 16 runs from 12 balls before he was dismissed by Trent Boult(1-26). Ajinkya Rahane was the top scorer for Rajasthan Royals with 45 runs from 40 balls while Sanju Samson scored 37 runs from 22 balls. He got a good start but failed to convert it into a big score. In the start of the Rajasthan’s inning,Delhi Daredevils got a quick success when D’Arcy Short(6) was run out in the second over. Then came Ben Stokes who hit a four in the Boult’s over and and six in the Chris Morris following over. 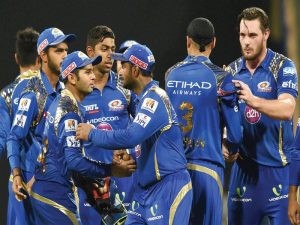 But in the next over of Trent Boult,he was dismissed when a sensational delivery from Boult that pitched on off stump and moved away sharply took the edge of Ben Stokes bat and went into the hands of Rishabh Pant. Rahane and Sanju Samson did a partnership of 62 runs for the third wicket.Shabhaj Nadeem(2-34) took the wicket of Sanju Samson in the 11th over followed by Rahane wicket which was also taken by Nadeem. Jos Butler came to bat and he brought a life into the Rajasthan inning again,smashing a boundary and a pair of sixes ,the English batsman was bowled by Mohammed Shami on a yorker.After the fall of Butler’s wicket, two balls later the rain arrived and the game stopped. 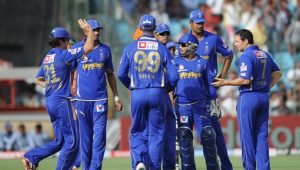 Due to the interruption of rain in the match, Delhi Daredevils were given a target of 71 runs from 6 overs using DLS method. In reply.Delhi Daredevils batsman struggled to chase this target but they failed and were able to score only 60 runs. Glenn Maxwell Inning of 17 of 12 balls and Rishabh pant inning of 20 runs from 14 balls showed some hope but Rajasthan could not win. Delhi Daredevils got the worst start as Colin Munro was run out on the first ball.In search of quick runs,Rajasthan Royals lost 3 wickets in the laat three overs with Ben Laughlin(2-20) claiming two of them and Rajasthan Royals beat Delhi Daredevils by 10 runs 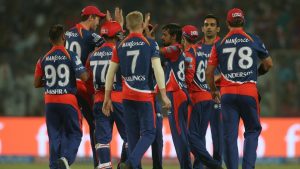